This year we are celebrating 125 years since telephones were introduced to Guernsey. We are proud to support our island community and honour our ancestry in connecting islanders for 125 years.

The States of Guernsey voted in 1896 to establish the Telephone Council. From this, the States Telephone Department was born and was initially intended to have a maximum of 300 users!

A lot has changed in 125 years but the evolution has not stopped. We have exciting plans for Guernsey as we continue to invest in the island’s infrastructure to provide the best technology for our community. As change in our industry continues at a rapid pace, we are growing and adapting with it and look forward to the next 125 years.

Here are just some of our favourite stories and milestones over the past 125 years that have led us to where we are today.

The telephone was invented in 1876 by Alexander Graham Bell and a limited telephone network was in operation in London as early as 1879. Soon word of this invention spread across the British Isles. 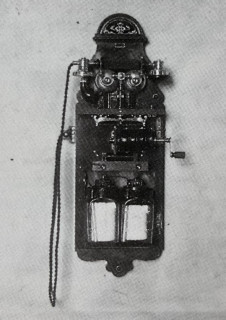 By 1895 many people felt that Guernsey should have its own telephone system. The British Post Office (GPO) held a monopoly on telephone services in the British Isles and was approached to introduce a system in Guernsey. However, its proposal was rejected by the States of Guernsey on the basis that only the privileged few could afford it.

On 17th June 1896, the States voted in favour of an independent telephone system and the States Telephone Council was set up to “establish, maintain and operate” a network on the island, with a budget of £4,850.

A disused chapel in Clifton in St Peter Port, was chosen as the site for the first Central exchange and headquarters. Additional switch rooms were set up in St Sampson’s and Castel as signals could only be transmitted across a limited distance. 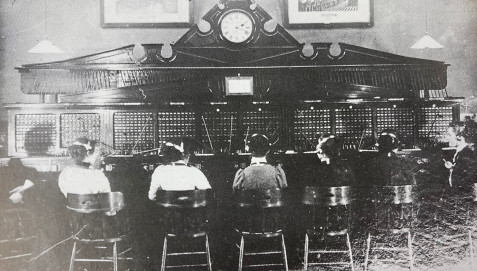 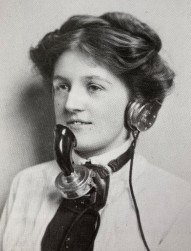 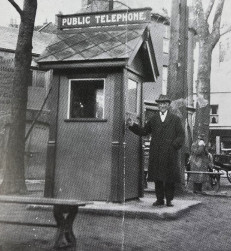 In May 1904, the Telephone Council received publicity in the English papers for linking the Guernsey hospital, King Edward VII, to its telephone system. Sockets were installed throughout the children’s ward that would allow nurses to plug in a telephone to any child’s bed. This was heralded as a wonderful treat for sick children, who could now speak to their families at any time. 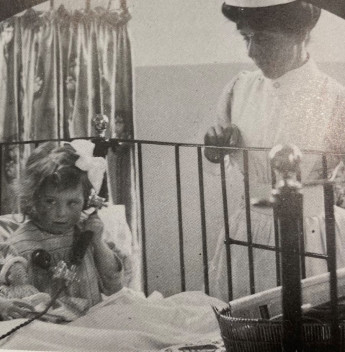 In February 1914 the Telephone Department bought a receiver to pick up the Greenwich time signal broadcast from the Eiffel Tower. This meant that clocks at the exchanges would now always show the correct time for the first time, making it an early fore-runner of the 'speaking clock'. However, the First World War broke out soon after, which meant the receiver was disconnected and the service suspended. Fortunately the service was reinstated after the war.

On 1st May 1915, the telephone system was extended further across the Bailiwick when a public telephone was installed at the Sark Post Office. 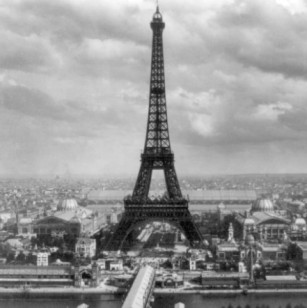 By 1927, all the exchanges were linked by underground cables. 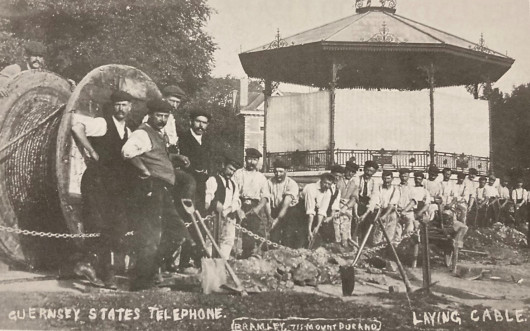 Two weeks later, a ceremony was held at the new Central exchange to mark the official opening of the trunk line to England and Jersey. This was made possible by a submarine cable running from Dartmouth to Guernsey, and then to Jersey. The first cross-channel call from the UK to Guernsey, and also from Guernsey to Jersey, was made the same day, overheard by an invited audience.

In 1935, a Daily Mail photographer was sent to Guernsey to report on a murder that had attracted UK media attention. The photographer brought one of the earliest fax machines to Guernsey and on 12th February 1935, he transmitted a picture of the dead man’s house to the UK. The picture appeared in the paper the next day and was the first time a picture had ever been sent via fax machine.

When German forces landed in Guernsey in June 1940, they quickly took control of the Central exchange. Telephone Department Manager, Ernest Bennett, was in the switch-room when they arrived, and he instructed one of the operators to send a message to London to say that the island was now occupied. Immediately after this, a German officer gave the order to disconnect all lines to the UK, Jersey and Sark.

One of the restrictions imposed by the German forces during the Occupation was the disconnection of all public telephones. Once cut off, the Telephone Department tried to secure their contents by locking all the kiosks, but before long, islanders began to remove various components to make crystal radio sets. These would be used to listen clandestinely to the BBC for news of the war, which was strictly prohibited by the German authorities.

In December 1947, work began on a Telephone exchange for Alderney which eventually opened in 1949. 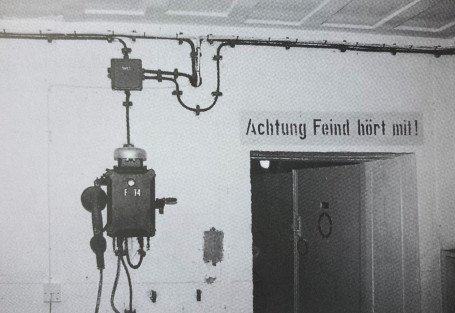 The first ‘banana yellow’ public telephone box was installed at White Rock in 1951. At its informal unveiling, the States Telephone Department’s manager explained that the bright yellow colour was necessary to ensure that the box was clearly visible day and night. Despite initial objections from the public, these telephone boxes became a common sight in Guernsey.

In the early 1950s, there were plans to move towards installing automatic dialling exchanges. While applications were made to the States of Guernsey to upgrade the Castel and St Martins exchanges, the first automatic exchange in the Bailiwick was installed in Herm. This meant that subscribers connected to automatic exchanges could dial each other directly, without operator assistance. 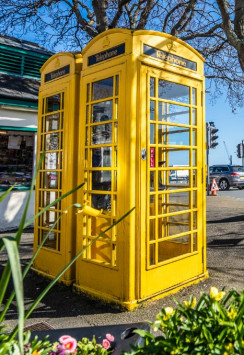 On 30th April 1966, a new Central exchange with an automatic system, known as Telephone House, was officially opened.

In March 1968, a competition was launched to find the ‘Girl with the Golden Voice’, following a decision to provide an automated speaking clock. The competition attracted over 160 entries. The winner was Mrs M. Le Bargy and her prize was £50 plus a fee of £25 for making necessary recordings.

In July 1972, a new look for the Guernsey telephone directory was published. For the first time, the cover carried a picture of a familiar island scene instead of being a plain colour.

The Guernsey Telephone Museum opened its doors for the first time on 29th July 1976 to mark 100 years since Alexander Graham Bell had invented the telephone. 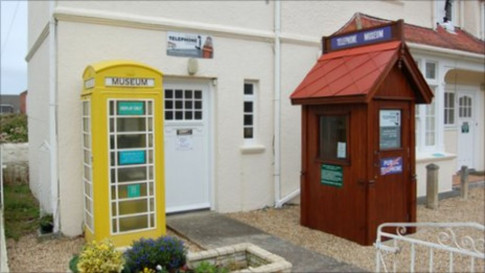 Prior to 1983, all telephone equipment was the property of Guernsey Telecoms and rented to customers. However, this changed in August 1983 when the option to buy equipment outright was introduced.

Cellular radio car phones, the forerunner of the mobile telephone, first appeared in Guernsey in May 1987. Although they had been common in the UK for some time their introduction to the island was delayed as it was unclear whether the demand existed with journey times being so much shorter.

In 1988 the first stage of a £5.7 million fibre optic link between Guernsey and the UK was complete. 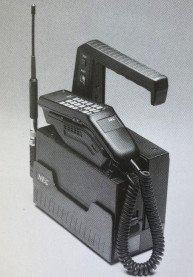 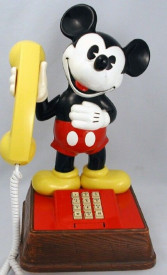 The internet first arrived in 1992 in the form of dial-up, at the same time as the rest of the UK. Dial-up internet access used Guernsey’s telephone network to establish a connection to the internet by dialling a telephone number on a conventional telephone line. This meant that you couldn’t use the internet while someone was on the phone.

On 17th November 1994 the first ‘videoconference’ call was made from the Guernsey headquarters of Willian Grant & Co. Ltd, the Scottish distillers. This was from a specific device that used a telephone, screen and camera.

Broadband internet was first connected in Guernsey in 1998 by Guernsey Telecoms. 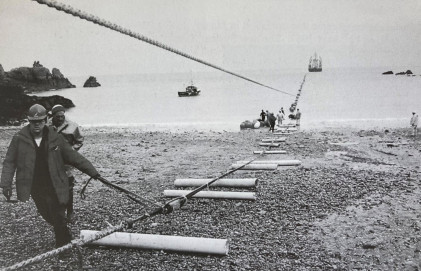 In the early 2000s, the internet grew at a phenomenal pace as platforms such as Facebook, YouTube and Skype were launched.

The internet landscape saw significant changes with the speed of the internet connections from the UK to Guernsey improving from 512Kbps to 10Gbps. (For context it would have taken 12 hours and 34 minutes to download an hour’s worth of videos on YouTube with download speeds of 512Kbps whereas today it only takes 2 seconds!)

In the same year, the first iPhone was launched. 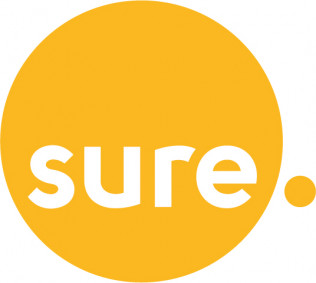 Guernsey saw its 4G roll-out in 2015, which now covers 99.5% of the Bailiwick, and we established local data centres across the Channel Islands and Isle of Man.

In 2019 we announced our multimillion-pound five-year investment plan which looks to improve our undersea fibre connectivity which links Guernsey to both the UK and France and the rest of the world. 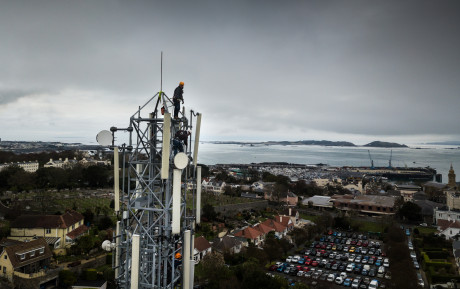 2020 was significantly impacted by the Coronavirus pandemic and our networks played a critical role in providing connectivity as islanders worked from home. During the first lockdown we saw a 45% increase in home broadband traffic.

We’re excited for the future of telecoms and are exploring technology such as fibre to the home for faster more reliable broadband.  We are proud to call Guernsey our home and to serve the communities of the Bailiwick as we have, in various guises, for 125 years.

Our lives have become more and more digital and we only see that trend continuing. We will continue to meet islanders’ needs in the 2020s and beyond, and our passionate team look forward to seeing whatever comes next in the telecoms world. Bring on the next 125 years! 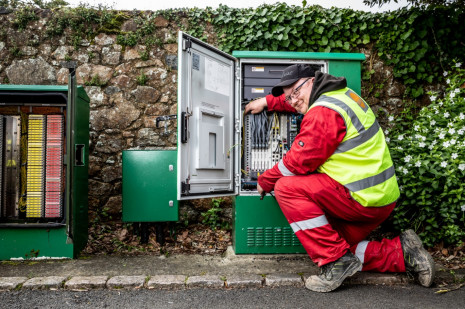